The Honorable Ken A. Guenther 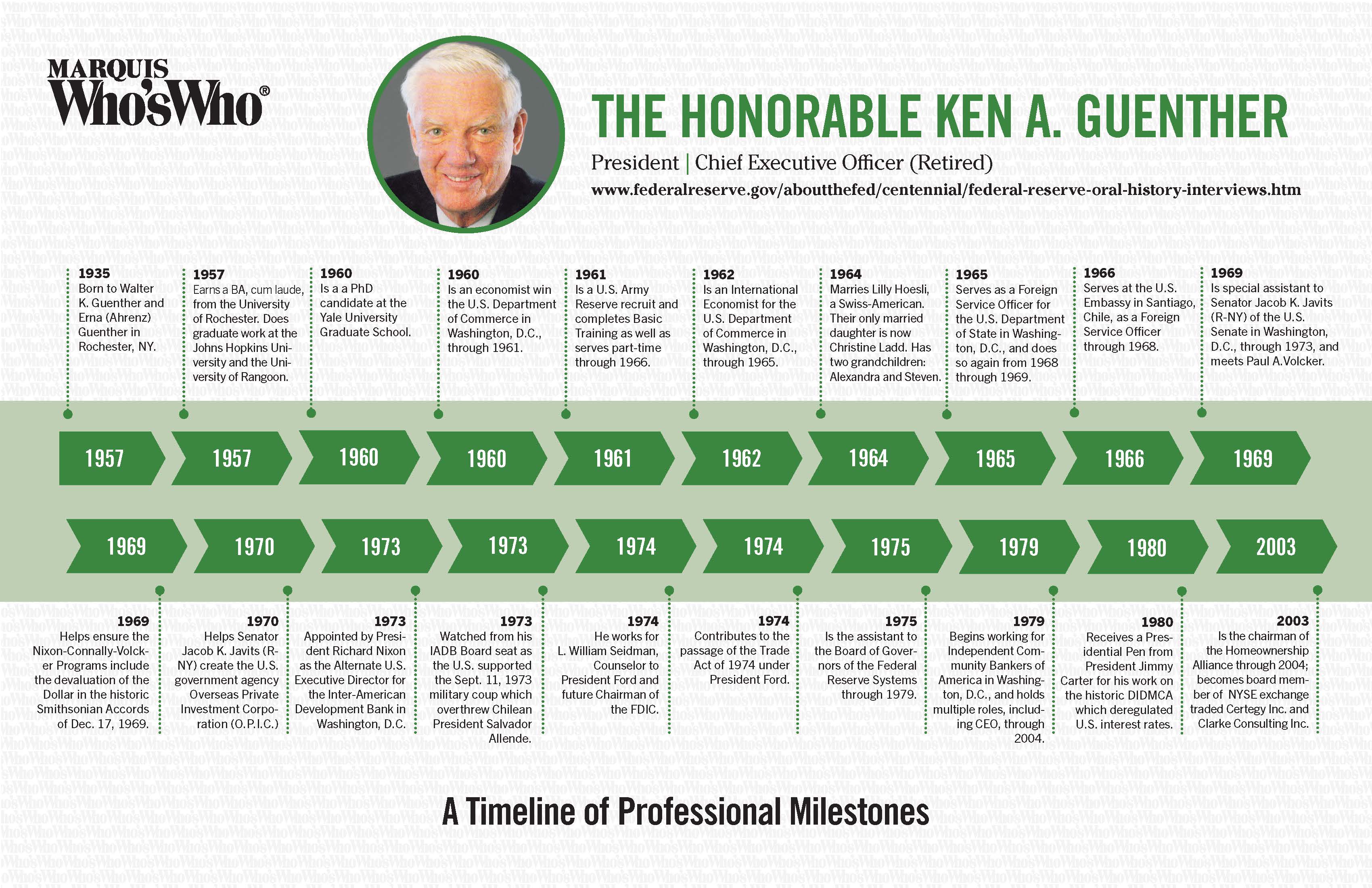 Is an economist with the U.S. Department of Commerce in Washington, D.C., through 1961.

Is a U.S. Army Reserve recruit and completes Basic Training as well as serves part-time through 1966.

Is an International Economist for the U.S. Department of Commerce in Washington, D.C., through 1965.

Marries Lilly Hoesli, a Swiss-American. Their only married daughter is now Christine Ladd. Has two grandchildren: Alexandra and Steven Ladd.

Serves as a Foreign Service Officer for the U.S. Department of State in Washington, D.C., and does so again from 1968 through 1969.

Serves at the U.S. Embassy in Santiago, Chile, as a Foreign Service Officer through 1968.

Is special assistant to Senator Jacob K. Javits (R-NY) of the U.S. Senate in Washington, D.C., through 1973, and meets Paul A.Volcker, then the US Treasury’s Under Secretary for Monetary Affairs.
1972 Lilly Guenther appointed FSO 7 by Dept. of Labor order which lapses in December 1979.. Senator Jacob K. Javits
is the ranking minority member of the Senate’s Labor and Public Welfare Committee.

During his time as a Presidential appointee of President Richard M. Nixon on the Board of the Inter-American Development Bank as a U S Director watches the US support of the successful military coup against President Salvador Allende on September 11, 1973. Chilean President Allende dies in the coup as do some of his key
supporters.

Is acting deputy special trade representative and head of office of the STR at the FORD White House through 1975 where he works for L. William Seidman, Counselor to President Ford. and future Chairman of the FDIC.

Contributes to the passage of the Trade Act of 1974 under President Ford which gave future U.S. Presidents ‘fast track’ authorities and contains the Jackson-Vanik amendment facilitating the immigration of Jews from the Soviet Union and Eastern European countries..

Is the assistant to the Board of Governors of the Federal Reserve Systems through 1979; receives the FED’S Special Achievement Award in 1977 and is the subject of a FED oral history released in 2019.

Begins working for Independent Community Bankers of America in Washington, D.C., and holds multiple roles including President and CEO through his retirement in 2004.

Receives a Presidential Pen from President Jimmy Carter for his work on the historic Depository Institutions Deregulations and Monetary Control Act of 1980 (DIDMCA) which deregulated U.S. interest rates while strengthening the
US’s central bank..

DIDMCA was enacted in response to FED Chairman Paul A. Volcker’s raising interest rates to over 20%; actions which broke the back of the inflation ravaging the U.S. economy and causing the flight of member banks from the Federal Reserve.

Is a member of the Board of Overseers with the Russian American Bankers Forum.

Receives an Electronic Funds Transfer Achievement Award from the U.S. Department of the Treasury.

Is the vice chairman and chairman of the Homeownership Alliance through 2004 and receives the organization’s Hero Award in 2004. Separately becomes Board member of NYSE exchange traded Certegy Inc. and Clarke Consulting Inc. Both were subsequently sold.

Maintains SAIS-JHU connections through his ongoing membership in the Christian Herter Society (CHS).