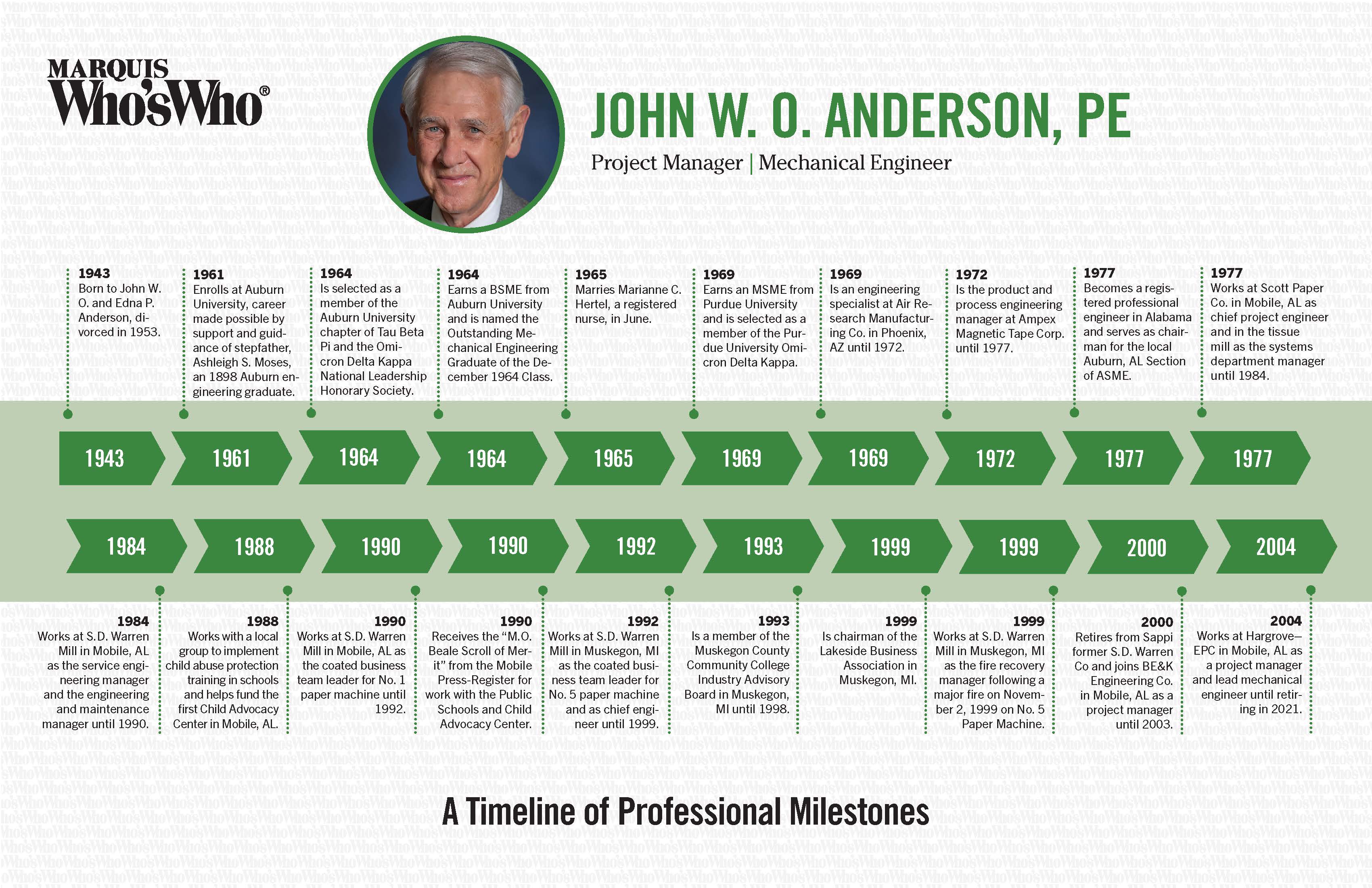 Enrolls at Auburn University, career made possible by support and guidance of stepfather, Ashleigh S. Moses, an 1898 Auburn engineering graduate.

Is selected as a member of the Auburn University chapter of Tau Beta Pi and the Omicron Delta Kappa National Leadership Honorary Society.

Earns a BSME from Auburn University and is named the Outstanding Mechanical Engineering Graduate of the December 1964 Class.

Is an engineering specialist at Air Research Manufacturing Co. in Phoenix, AZ until 1972.

Is the product and process engineering manager at Ampex Magnetic Tape Corp. until 1977.

Becomes a registered professional engineer in Alabama and serves as chairman for the local Auburn, AL Section of ASME.

Works at Scott Paper Co. in Mobile, AL as chief project engineer and in the tissue mill as the systems department manager until 1984.

Works at S.D. Warren Mill in Mobile, AL as the service engineering manager and the engineering and maintenance manager until 1990.

Works at S.D. Warren Mill in Mobile, AL as the coated business team leader for No. 1 paper machine until 1992.

Receives the “M.O. Beale Scroll of Merit” from the Mobile Press-Register for work with the Public Schools and Child Advocacy Center.

Works at S.D. Warren Mill in Muskegon, MI as the coated business team leader for No. 5 paper machine and as chief engineer until 1999.

Is a member of the Muskegon County Community College Industry Advisory Board in Muskegon, MI until 1998.

Is chairman of the Lakeside Business Association in Muskegon, MI.

Works at S.D. Warren Mill in Muskegon, MI as the fire recovery manager following a major fire on November 2, 1999 on No. 5 Paper Machine.

Retires from Sappi former S.D. Warren Co and joins BE&K Engineering Co. in Mobile, AL as a project manager until 2003.

Works at Hargrove–EPC in Mobile, AL as a project manager and lead mechanical engineer until retiring in 2021.