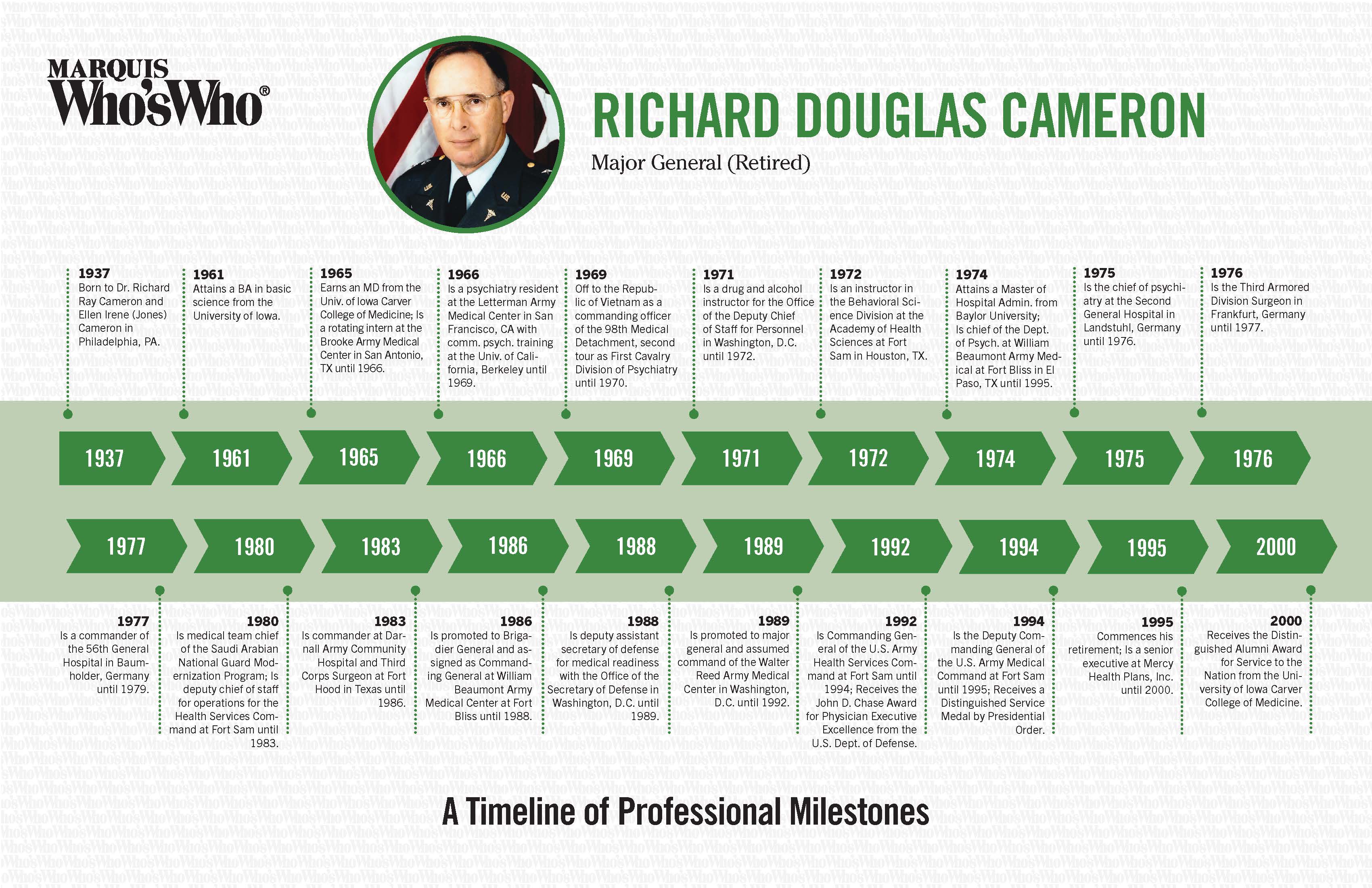 Attains a BA in basic science from the University of Iowa.

Earns an MD from the Univ. of Iowa Carver College of Medicine; Is a rotating intern at the Brooke Army Medical Center in San Antonio, TX until 1966.

Is a psychiatry resident at the Letterman Army Medical Center in San Francisco, CA with comm. psych. training at the Univ. of California, Berkeley until 1969.

Off to the Republic of Vietnam as a commanding officer of the 98th Medical Detachment, second tour as First Cavalry Division of Psychiatry until 1970.

Is a drug and alcohol instructor for the Office of the Deputy Chief of Staff for Personnel in Washington, D.C. until 1972.

Is an instructor in the Behavioral Science Division at the Academy of Health Sciences at Fort Sam in Houston, TX.

Attains a Master of Hospital Admin. from Baylor University; Is chief of the Dept. of Psych. at William Beaumont Army Medical at Fort Bliss in El Paso, TX until 1995.

Is the chief of psychiatry at the Second General Hospital in Landstuhl, Germany until 1976.

Is the Third Armored Division Surgeon in Frankfurt, Germany until 1977.

Is a commander of the 56th General Hospital in Baumholder, Germany until 1979.

Is medical team chief of the Saudi Arabian National Guard Modernization Program; Is deputy chief of staff for operations for the Health Services Command at Fort Sam until 1983.

Is commander at Darnall Army Community Hospital and Third Corps Surgeon at Fort Hood in Texas until 1986.

Is promoted to Brigadier General and assigned as Commanding General at William Beaumont Army Medical Center at Fort Bliss until 1988.

Is deputy assistant secretary of defense for medical readiness with the Office of the Secretary of Defense in Washington, D.C. until 1989.

Is promoted to major general and assumed command of the Walter Reed Army Medical Center in Washington, D.C. until 1992.

Is Commanding General of the U.S. Army Health Services Command at Fort Sam until 1994; Receives the John D. Chase Award for Physician Executive Excellence from the U.S. Dept. of Defense.

Is the Deputy Commanding General of the U.S. Army Medical Command at Fort Sam until 1995; Receives a Distinguished Service Medal by Presidential Order.

Commences his retirement; Is a senior executive at Mercy Health Plans, Inc. until 2000.

Receives the Distinguished Alumni Award for Service to the Nation from the University of Iowa Carver College of Medicine.