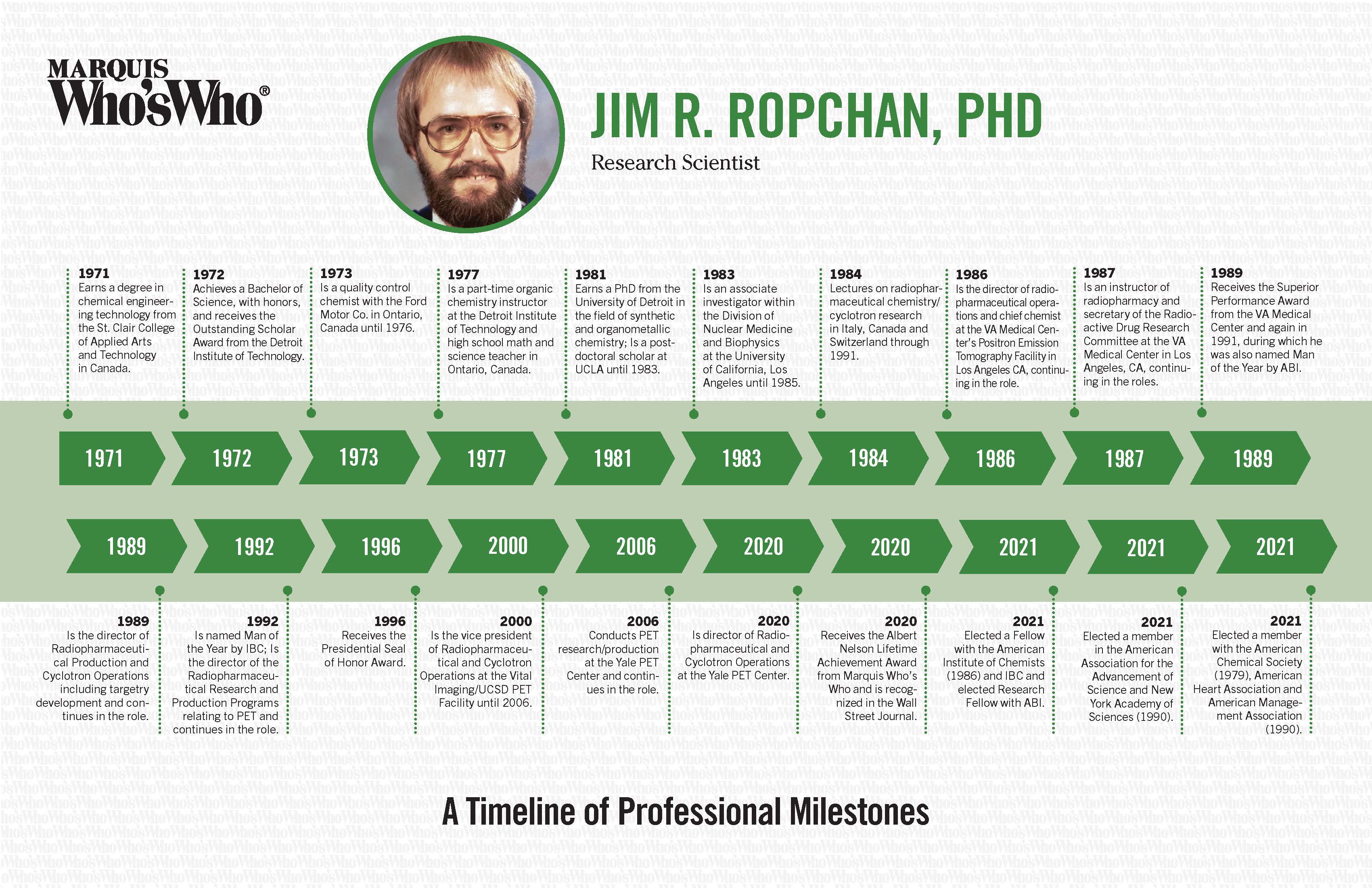 Earns a degree in chemical engineering technology from the St. Clair College of Applied Arts and Technology in Canada.

Achieves a Bachelor of Science, with honors, and receives the Outstanding Scholar Award from the Detroit Institute of Technology.

Is a quality control chemist with the Ford Motor Co. in Ontario, Canada until 1976.

Is a part-time organic chemistry instructor at the Detroit Institute of Technology and a high school math and science teacher in Ontario, Canada.

Earns a PhD from the University of Detroit in the field of synthetic and organometallic chemistry; Is a postdoctoral scholar at UCLA until 1983.

Is an associate investigator within the Division of Nuclear Medicine and Biophysics at the University of California, Los Angeles until 1985.

Lectures on radiopharmaceutical chemistry/cyclotron research in Italy, Canada and Switzerland through 1991.

Is the director of radiopharmaceutical operations and chief chemist at the VA Medical Center’s Positron Emission Tomography Facility in Los Angeles CA, continuing in the role.

Is an instructor of radiopharmacy and secretary of the Radioactive Drug Research Committee at the VA Medical Center in Los Angeles, CA, continuing in the roles.

Receives the Superior Performance Award from the VA Medical Center and again in 1991, during which he was also named Man of the Year by ABI.

Is the director of Radiopharmaceutical Production and Cyclotron Operations including targetry development and continues in the role.

Is named Man of the Year by IBC; Is the director of the Radiopharmaceutical Research and Production Programs relating to PET and continues in the role.

Is the vice president of Radiopharmaceutical and Cyclotron Operations at the Vital Imaging/UCSD PET Facility until 2006.

Conducts PET research/production at the Yale PET Center and continues in the role.

Is director of Radiopharmaceutical and Cyclotron Operations at the Yale PET Center.

Receives the Albert Nelson Lifetime Achievement Award from Marquis Who’s Who and is recognized in the Wall Street Journal.

Elected a Fellow with the American Institute of Chemists (1986) and IBC and elected Research Fellow with ABI.

Elected a member in the American Association for the Advancement of Science and New York Academy of Sciences (1990).