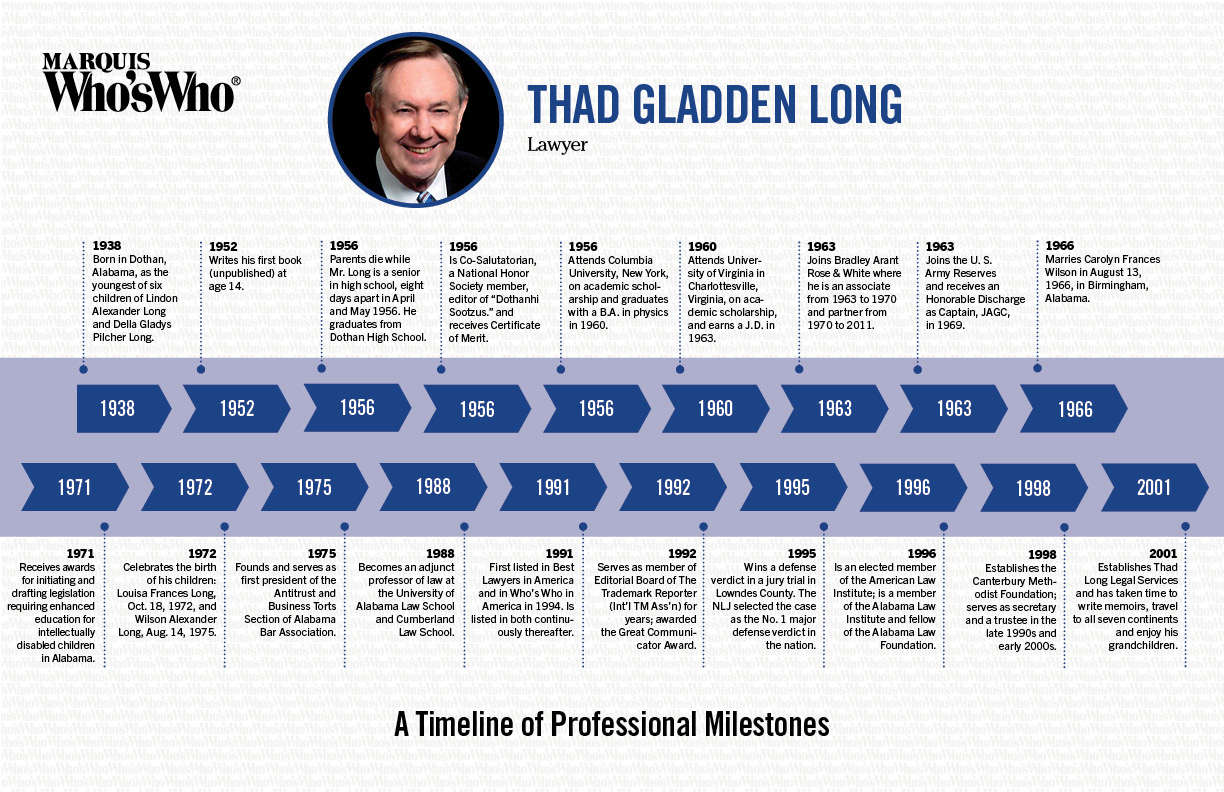 Born in Dothan, Alabama, as the youngest of six children of Lindon Alexander Long and Della Gladys Pilcher Long.

His parents die while he was a senior in high school, eight days apart in April and May 1956. Shortly thereafter, Mr. Long graduates from Dothan High School as a Co-Salutatorian, a member of the National Honor Society, editor of “Dothanhi Sootzus,” and is given a Certificate of Merit by the National Merit Committee.

Attends Columbia University, New York, on academic scholarship and graduates with a B.A. in physics in 1960.

Attends the University of Virginia in Charlottesville, Virginia, on academic scholarship, and earns a J.D. in 1963. Was inducted into the Order of the Coif, served as the Comments & Projects Editor for the Virginia Law Review, and was a member of Omicron Delta Kappa, Raven Society, Pi Delta Epsilon, Phi Delta Phi, as well as a resident on the historic Lawn.

Joins Bradley Arant Rose & White. Is an associate from 1963 to 1970 and partner from 1970 to 2011. Is a member of the Executive Committee and serves as chair of the Antitrust, Business Torts and Intellectual Property Practice Group.

Joins the U. S. Army Reserves and receives an Honorable Discharge as Captain, JAGC, in 1969.

Married Carolyn Frances Wilson, who holds a B.A. from Hollins College and University of Paris and a M.A. from the University of Alabama, in August 13, 1966, in Birmingham, Alabama.

Serves as a member of Editorial Board of The Trademark Reporter (Int’l TM Ass’n) for years and is awarded Great Communicator Award among all members.

Wins a defense verdict in a jury trial in Lowndes County. The case involves an exploding tire resulting in the death of one person, brain damage to another and serious injuries to still others.  The victory came despite a bribery attempt on the plaintiff side and in a hostile venue.  The National Law Journal selects this case as the number one among 12 selected major defense verdicts in the nation in that year.

Establishes Thad Long Legal Services and has taken time to write memoirs and make multiple trips around the world and to all seven continents.  Best of all these accomplishments are the joys of grandchildren.