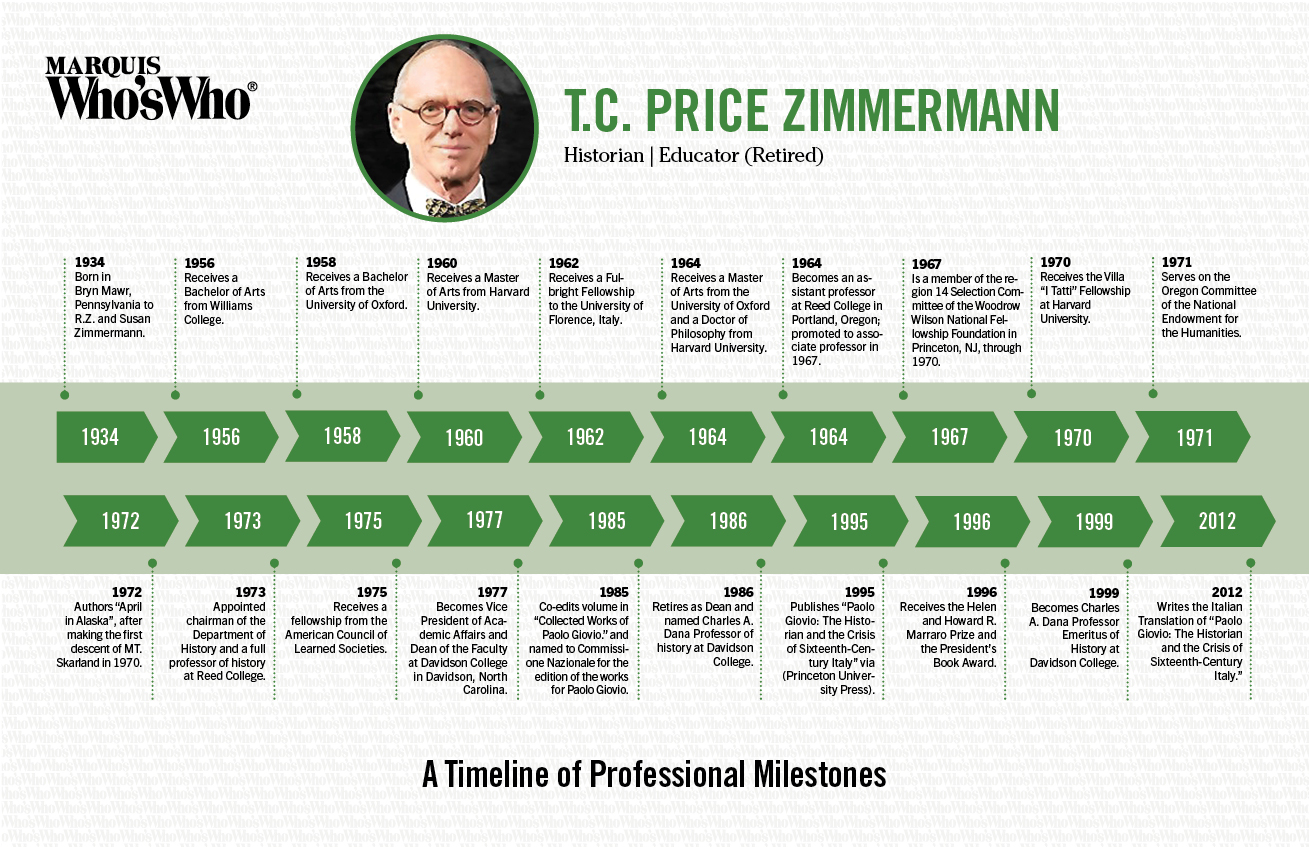 A Timeline of Professional Moments

Born in Bryn Mawr, Pennsylvania to R.Z. and Susan Zimmermann.

Receives a Bachelor of Arts from Williams College.

Receives a Bachelor of Arts from the University of Oxford.

Receives a Master of Arts from Harvard University.

Receives a Fulbright Fellowship to the University of Florence, Italy.

Receives a Master of Arts from the University of Oxford and a Doctor of Philosophy from Harvard University.

Becomes an assistant professor at Reed College in Portland, Oregon; promoted to associate professor in 1967.

Is a member of the region 14 Selection Committee of the Woodrow Wilson National Fellowship Foundation in Princeton, NJ, through 1970.

Receives the Villa “I Tatti” Fellowship at Harvard University.

Serves on the Oregon Committee of the National Endowment for the Humanities.

Authors “April in Alaska”, after making the first descent of MT. Skarland in 1970.

Appointed chairman of the Department of History and a full professor of history at Reed College.

Receives a fellowship from the American Council of Learned Societies.

Becomes Vice President of Academic Affairs and Dean of the Faculty at Davidson College in Davidson, North Carolina.

Co-edits volume in “Collected Works of Paolo Giovio.” and named to Commissione Nazionale for the edition of the works for Paolo Giovio.

Retires as Dean and named Charles A. Dana Professor of history at Davidson College.

Publishes “Paolo Giovio: The Historian and the Crisis of Sixteenth-Century Italy” via (Princeton University Press).

Receives the Helen and Howard R. Marraro Prize and the President’s Book Award.

Writes the Italian Translation of “Paolo Giovio: The Historian and the Crisis of Sixteenth-Century Italy.”