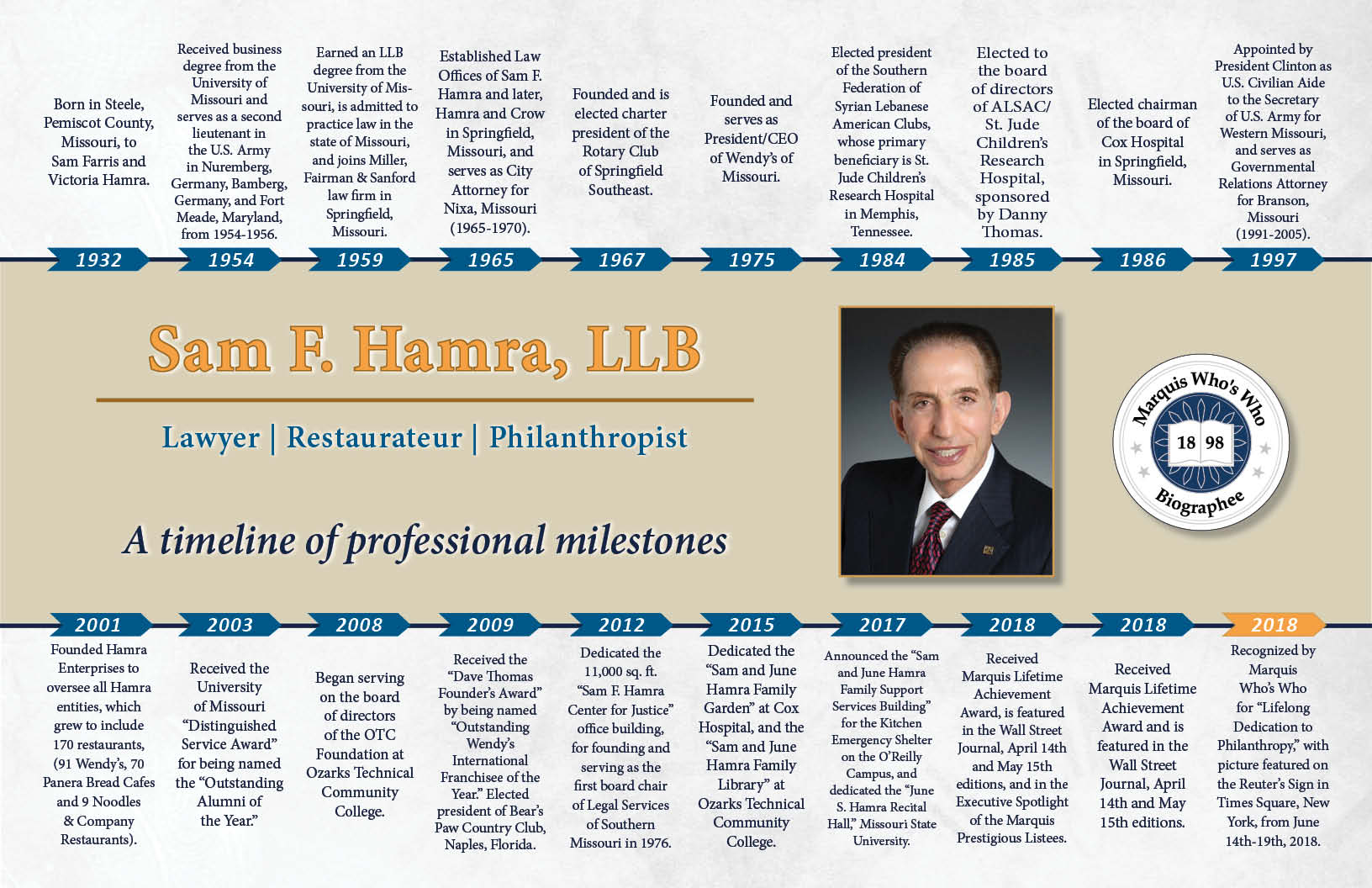 Received business degree from the University of Missouri and serves as a second lieutenant in the U.S. Army in Nuremberg, Germany, Bamberg, Germany, and Fort Meade, Maryland, from 1954-1956.

Earned an LLB degree from the University of Missouri, is admitted to practice law in the state of Missouri, and joins Miller, Fairman & Sanford law firm in Springfield, Missouri.

Established Law Offices of Sam F. Hamra and later, Hamra and Crow in Springfield, Missouri, and serves as City Attorney for Nixa, Missouri (1965-1970).

Founded and is elected charter president of the Rotary Club of Springfield Southeast.

Founded and serves as President/CEO of Wendy’s of Missouri.

Elected to the board of directors of ALSAC/St. Jude Children’s Research Hospital, sponsored by Danny Thomas.

Elected chairman of the board of Cox Hospital in Springfield, Missouri.

Appointed by President Clinton as U.S. Civilian Aide to the Secretary of U.S. Army for Western Missouri, and serves as Governmental Relations Attorney for Branson, Missouri (1991-2005).

Received the University of Missouri “Distinguished Service Award” for being named the “Outstanding Alumni of the Year.”

Began serving on the board of directors of the OTC Foundation at Ozarks Technical Community College.

Dedicated the 11,000 sq. ft. “Sam F. Hamra Center for Justice” office building, for founding and serving as the first board chair of Legal Services of Southern Missouri in 1976.

Named the “Springfieldian of the Year” by the Springfield Area Chamber of Commerce.

Received Marquis Lifetime Achievement Award, is featured in the Wall Street Journal, April 14th and May 15th editions, and in the Executive Spotlight of the Marquis Prestigious Listees.

Recognized by Marquis Who’s Who for “Lifelong Dedication to Philanthropy,” with picture featured on the Reuter’s Sign in Times Square, New York, from June 14th-19th, 2018.