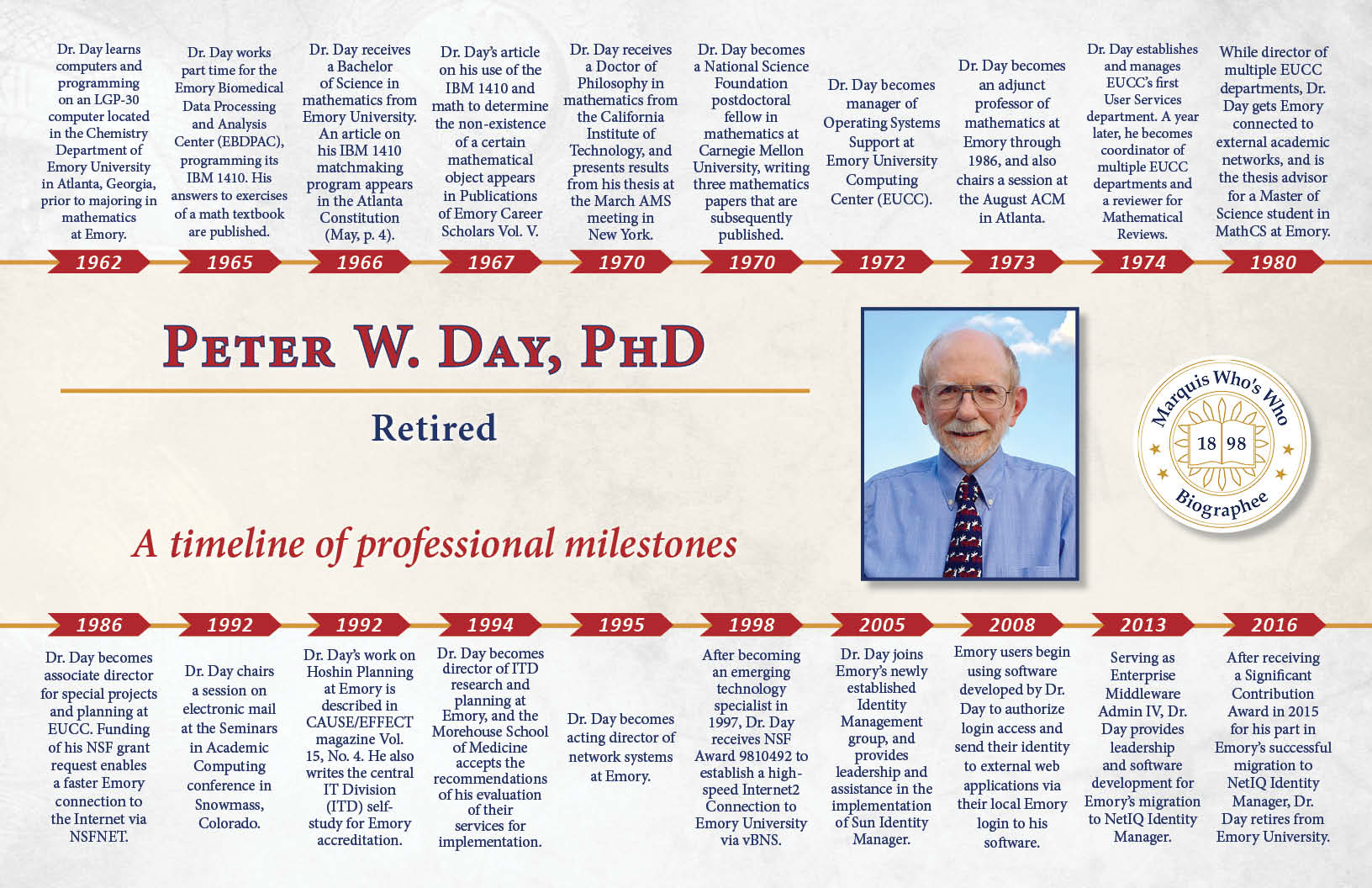 Dr. Day learns computers and programming on an LGP-30 computer located in the Chemistry Department of Emory University in Atlanta, Georgia, prior to majoring in mathematics at Emory.

Dr. Day works part time for the Emory Biomedical Data Processing and Analysis Center (EBDPAC), programming its IBM 1410. His answers to exercises of a math textbook are published.

Dr. Day receives a Bachelor of Science in mathematics from Emory University. An article on his IBM 1410 matchmaking program appears in the Atlanta Constitution (May, p. 4).

Dr. Day’s article on his use of the IBM 1410 and math to determine the non-existence of a certain mathematical object appears in Publications of Emory Career Scholars Vol. V.

Dr. Day receives a Doctor of Philosophy in mathematics from the California Institute of Technology, and presents results from his thesis at the March AMS meeting in New York.

Dr. Day becomes an adjunct professor of mathematics at Emory through 1986, and also chairs a session at the August ACM in Atlanta.

While director of multiple EUCC departments, Dr. Day gets Emory connected to external academic networks, and is the thesis advisor for a Master of Science student in MathCS at Emory.

Dr. Day becomes associate director for special projects and planning at EUCC. Funding of his NSF grant request enables a faster Emory connection to the Internet via NSFNET.

Dr. Day chairs a session on electronic mail at the Seminars in Academic Computing conference in Snowmass, Colorado.

Dr. Day’s work on Hoshin Planning at Emory is described in CAUSE/EFFECT magazine Vol. 15, No. 4. He also writes the central IT Division (ITD) self-study for Emory accreditation.

Dr. Day becomes director of ITD research and planning at Emory, and the Morehouse School of Medicine accepts the recommendations of his evaluation of their services for implementation.

After becoming an emerging technology specialist in 1997, Dr. Day receives NSF Award 9810492 to establish a high-speed Internet2 Connection to Emory University via vBNS.

Emory users begin using software developed by Dr. Day to authorize login access and send their identity to external web applications via their local Emory login to his software.

After receiving a Significant Contribution Award in 2015 for his part in Emory’s successful migration to NetIQ Identity Manager, Dr. Day retires from Emory University.