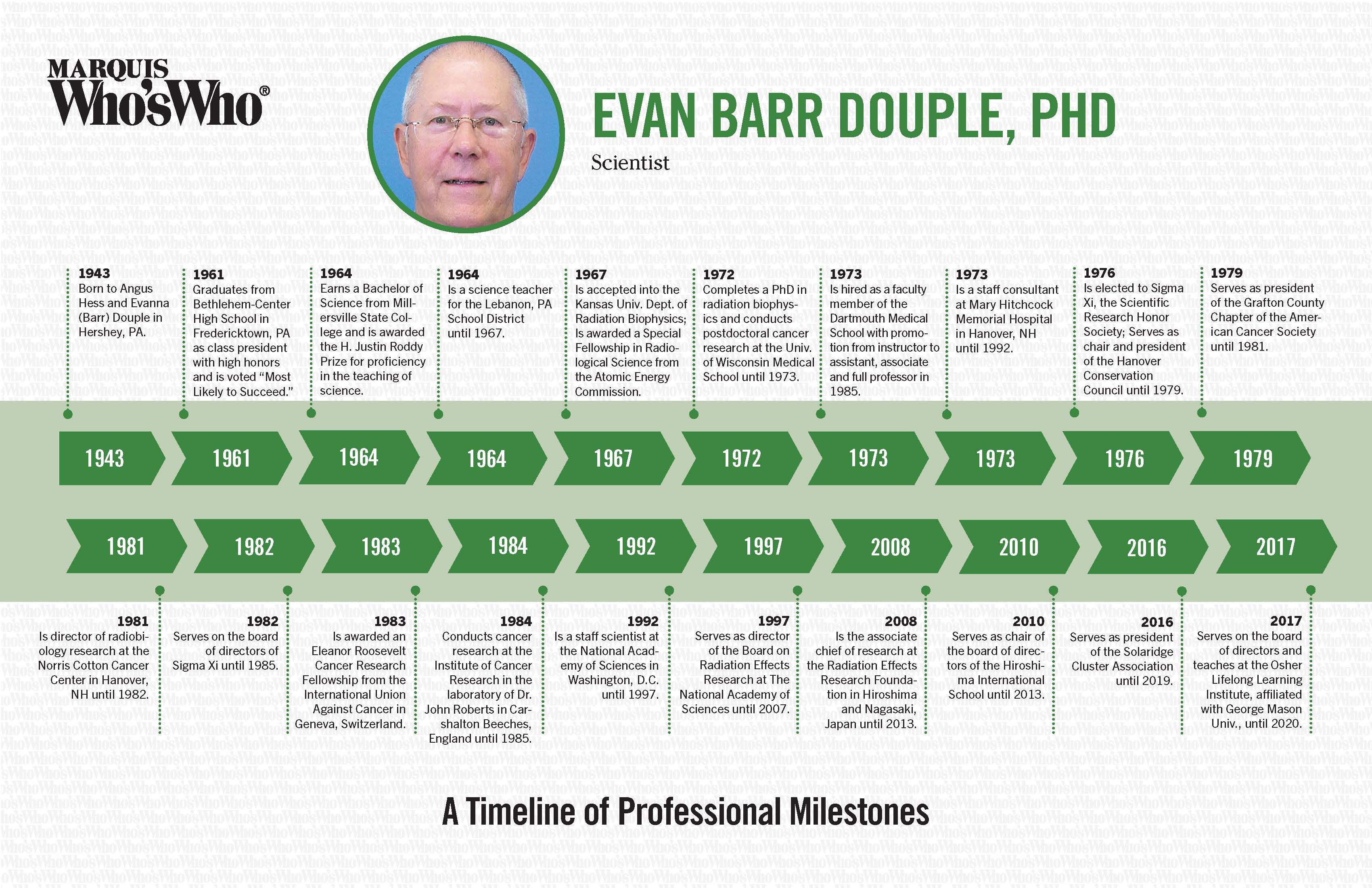 Graduates from Bethlehem-Center High School in Fredericktown, PA as class president with high honors and is voted “Most Likely to Succeed.”

Earns a Bachelor of Science from Millersville State College and is awarded the H. Justin Roddy Prize for proficiency in the teaching of science.

Is a science teacher for the Lebanon, PA School District until 1967.

Is accepted into the Kansas Univ. Dept. of Radiation Biophysics; Is awarded a Special Fellowship in Radiological Science from the Atomic Energy Commission.

Completes a PhD in radiation biophysics and conducts postdoctoral cancer research at the Univ. of Wisconsin Medical School until 1973.

Is hired as a faculty member of the Dartmouth Medical School with promotion from instructor to assistant, associate and full professor in 1985.

Is a staff consultant at Mary Hitchcock Memorial Hospital in Hanover, NH until 1992.

Is elected to Sigma Xi, the Scientific Research Honor Society; Serves as chair and president of the Hanover Conservation Council until 1979.

Serves as president of the Grafton County Chapter of the American Cancer Society until 1981.

Is director of radiobiology research at the Norris Cotton Cancer Center in Hanover, NH until 1982.

Serves on the board of directors of Sigma Xi until 1985.

Is awarded an Eleanor Roosevelt Cancer Research Fellowship from the International Union Against Cancer in Geneva, Switzerland.

Conducts cancer research at the Institute of Cancer Research in the laboratory of Dr. John Roberts in Carshalton Beeches, England until 1985.

Is a staff scientist at the National Academy of Sciences in Washington, D.C. until 1997.

Serves as director of the Board on Radiation Effects Research at The National Academy of Sciences until 2007.

Is the associate chief of research at the Radiation Effects Research Foundation in Hiroshima and Nagasaki, Japan until 2013.

Serves as chair of the board of directors of the Hiroshima International School until 2013.

Serves as president of the Solaridge Cluster Association until 2019.

Serves on the board of directors and teaches at the Osher Lifelong Learning Institute, affiliated with George Mason Univ., until 2020.