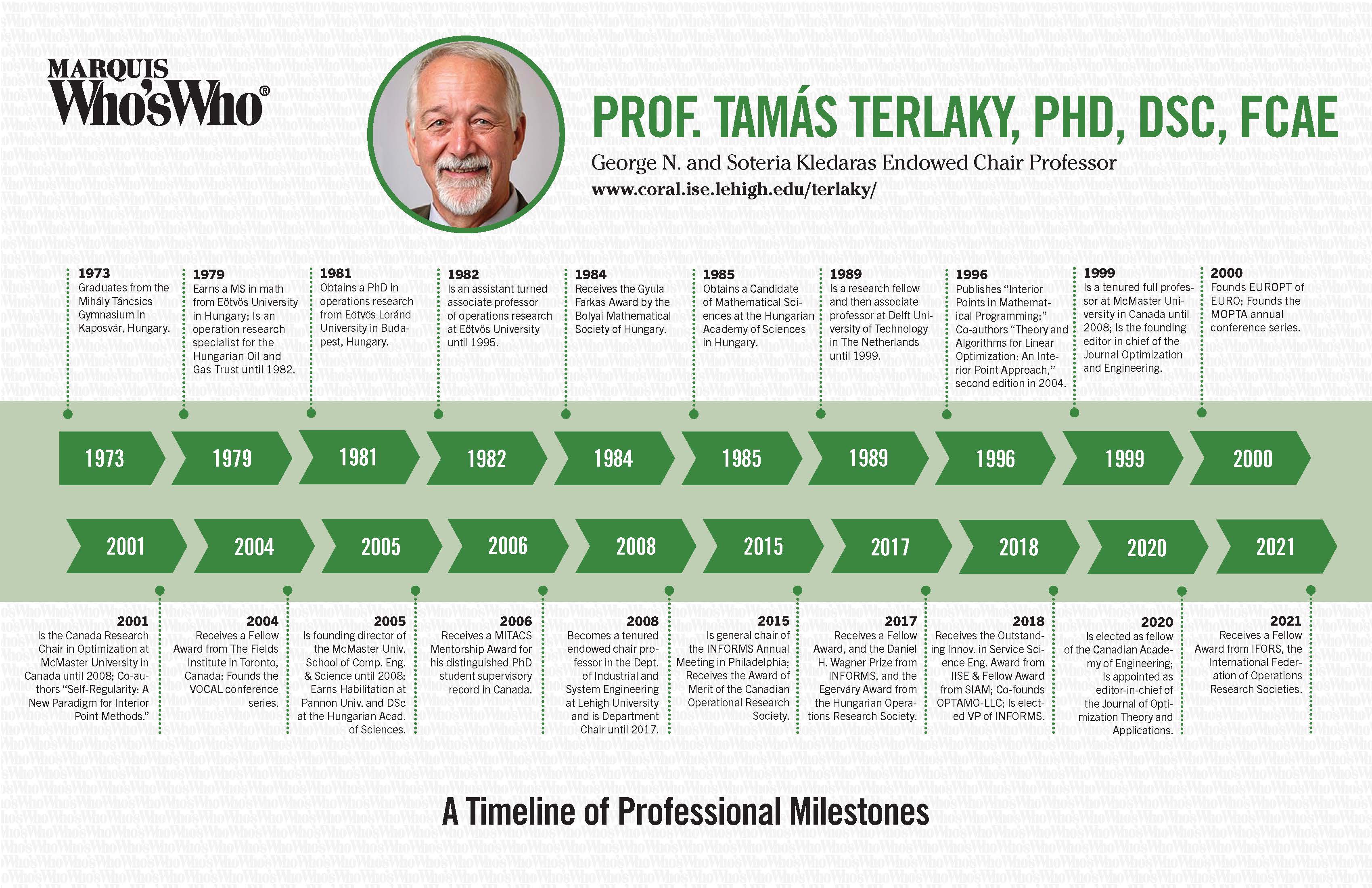 Graduates from the Mihály Táncsics Gymnasium in Kaposvár, Hungary.

Earns a MS in math from Eötvös University in Hungary; Is an operation research specialist for the Hungarian Oil and Gas Trust until 1982.

Obtains a PhD in operations research from Eötvös Loránd University in Budapest, Hungary.

Is an assistant turned associate professor of operations research at Eötvös University until 1995.

Receives the Gyula Farkas Award by the Bolyai Mathematical Society of Hungary.

Obtains a Candidate of Mathematical Sciences at the Hungarian Academy of Sciences in Hungary.

Is a research fellow and then associate professor at Delft University of Technology in The Netherlands until 1999.

Is a tenured full professor at McMaster University in Canada until 2008; Is the founding editor in chief of the Journal Optimization and Engineering.

Is the Canada Research Chair in Optimization at McMaster University in Canada until 2008; Co-authors “Self-Regularity: A New Paradigm for Interior Point Methods.”

Receives a Fellow Award from The Fields Institute in Toronto, Canada; Founds the VOCAL conference series.

Is founding director of the McMaster Univ. School of Comp. Eng. & Science until 2008; Earns Habilitation at Pannon Univ. and DSc at the Hungarian Acad. of Sciences.

Becomes a tenured endowed chair professor in the Dept. of Industrial and System Engineering at Lehigh University and is Department Chair until 2017.

Is general chair of the INFORMS Annual Meeting in Philadelphia; Receives the Award of Merit of the Canadian Operational Research Society.

Receives a Fellow Award, and the Daniel H. Wagner Prize from INFORMS, and the Egerváry Award from the Hungarian Operations Research Society.

Is elected as fellow of the Canadian Academy of Engineering; Is appointed as editor-in-chief of the Journal of Optimization Theory and Applications.

Receives a Fellow Award from IFORS, the International Federation of Operations Research Societies.