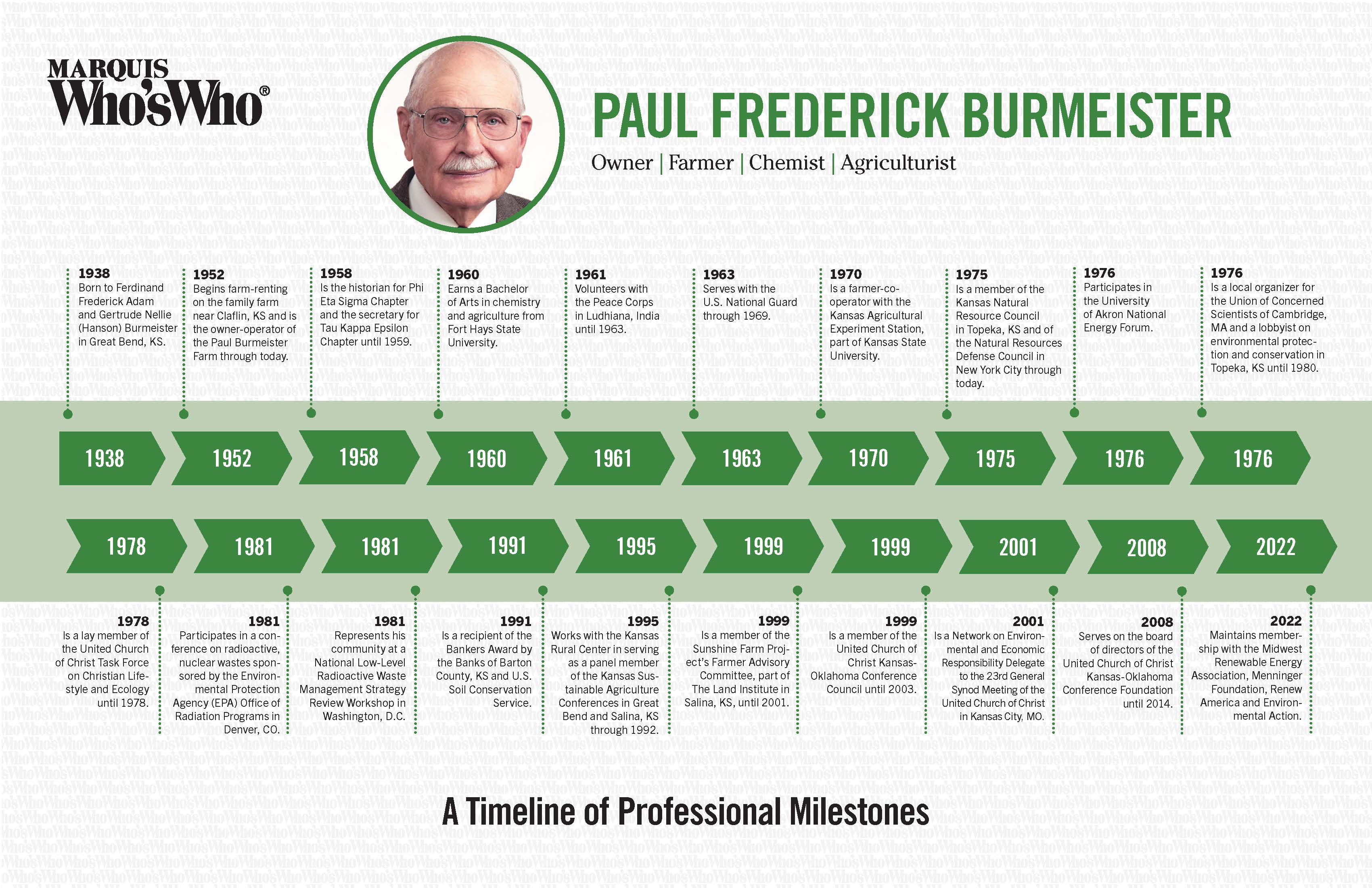 Begins farm-renting on the family farm near Claflin, KS and is the owner-operator of the Paul Burmeister Farm through today.

Is the historian for Phi Eta Sigma Chapter and the secretary for Tau Kappa Epsilon Chapter until 1959.

Earns a Bachelor of Arts in chemistry and agriculture from Fort Hays State University.

Volunteers with the Peace Corps in Ludhiana, India until 1963.

Serves with the U.S. National Guard through 1969.

Is a farmer-cooperator with the Kansas Agricultural Experiment Station, part of Kansas State University.

Participates in the University of Akron National Energy Forum.

Is a local organizer for the Union of Concerned Scientists of Cambridge, MA and a lobbyist on environmental protection and conservation in Topeka, KS until 1980.

Is a lay member of the United Church of Christ Task Force on Christian Lifestyle and Ecology until 1978.

Participates in a conference on radioactive, nuclear wastes sponsored by the Environmental Protection Agency (EPA) Office of Radiation Programs in Denver, CO.

Is a recipient of the Bankers Award by the Banks of Barton County, KS and U.S. Soil Conservation Service.

Works with the Kansas Rural Center in serving as a panel member of the Kansas Sustainable Agriculture Conferences in Great Bend and Salina, KS through 1992.

Is a member of the Sunshine Farm Project’s Farmer Advisory Committee, part of The Land Institute in Salina, KS, until 2001.

Is a member of the United Church of Christ Kansas-Oklahoma Conference Council until 2003.

Is a Network on Environmental and Economic Responsibility Delegate to the 23rd General Synod Meeting of the United Church of Christ in Kansas City, MO.

Serves on the board of trustees of the Clara Barton Hospital Foundation in Hoisington, KS until 2010.

Serves on the board of directors of the United Church of Christ Kansas-Oklahoma Conference Foundation until 2014.