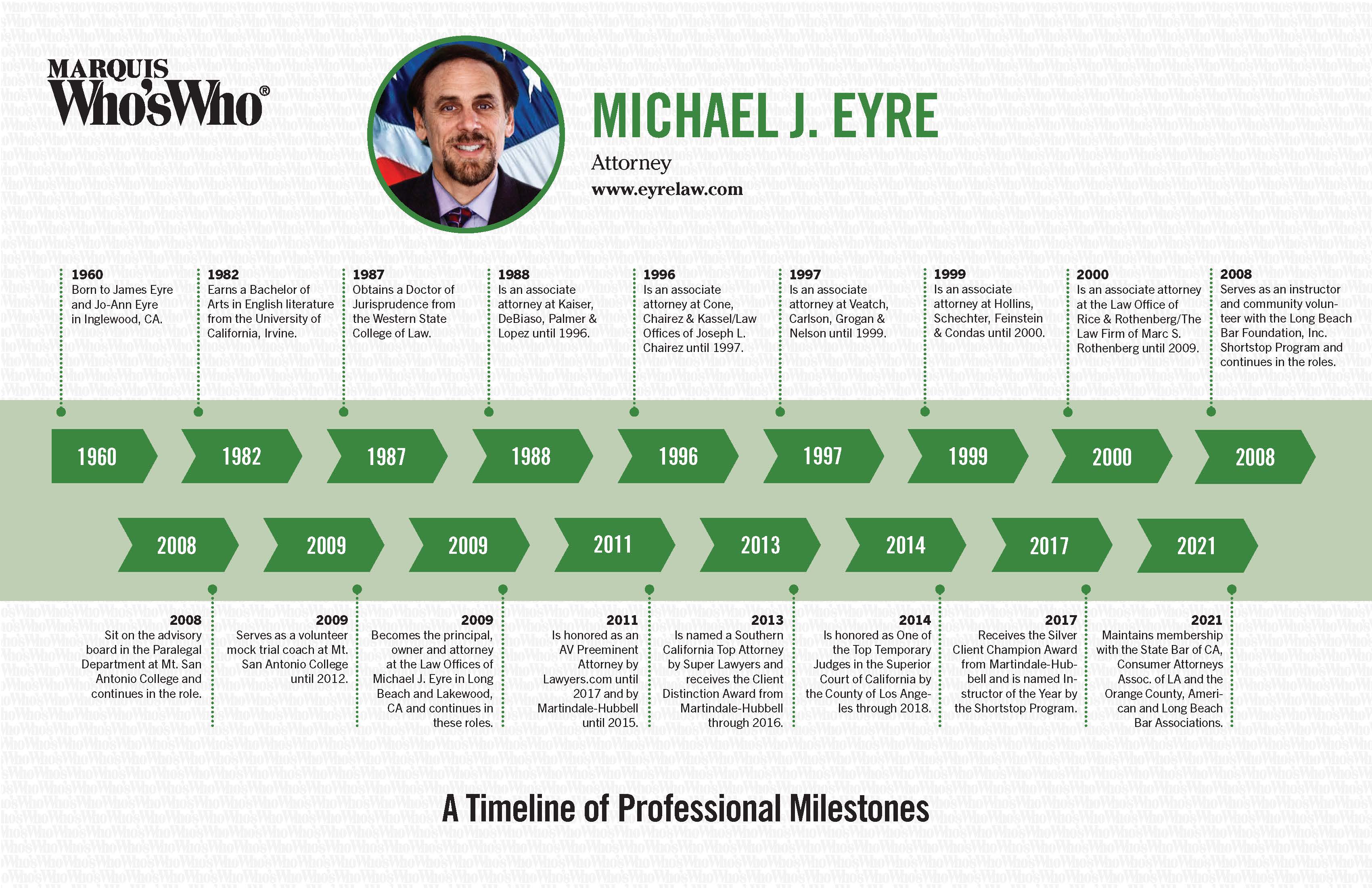 Born to James Eyre and Jo-Ann Eyre in Inglewood, CA.

Earns a Bachelor of Arts in English literature from the University of California, Irvine.

Obtains a Doctor of Jurisprudence from the Western State College of Law.

Is an associate attorney at Kaiser, DeBiaso, Palmer & Lopez until 1996.

Is an associate attorney at Cone, Chairez & Kassel/Law Offices of Joseph L. Chairez until 1997.

Is an associate attorney at Veatch, Carlson, Grogan & Nelson until 1999.

Is an associate attorney at Hollins, Schechter, Feinstein & Condas until 2000.

Is an associate attorney at the Law Office of Rice & Rothenberg/The Law Firm of Marc S. Rothenberg until 2009.

Serves as an instructor and community volunteer with the Long Beach Bar Foundation, Inc. Shortstop Program and continues in the roles.

Sit on the advisory board in the Paralegal Department at Mt. San Antonio College and continues in the role.

Serves as a volunteer mock trial coach at Mt. San Antonio College until 2012.

Becomes the principal, owner and attorney at the Law Offices of Michael J. Eyre in Long Beach and Lakewood, CA and continues in these roles.

Is honored as an AV Preeminent Attorney by Lawyers.com until 2017 and by Martindale-Hubbell until 2015.

Is named a Southern California Top Attorney by Super Lawyers and receives the Client Distinction Award from Martindale-Hubbell through 2016.

Is honored as One of the Top Temporary Judges in the Superior Court of California by the County of Los Angeles through 2018.

Receives the Silver Client Champion Award from Martindale-Hubbell and is named Instructor of the Year by the Shortstop Program.

Maintains membership with the State Bar of CA, Consumer Attorneys Assoc. of LA and the Orange County, American and Long Beach Bar Associations.