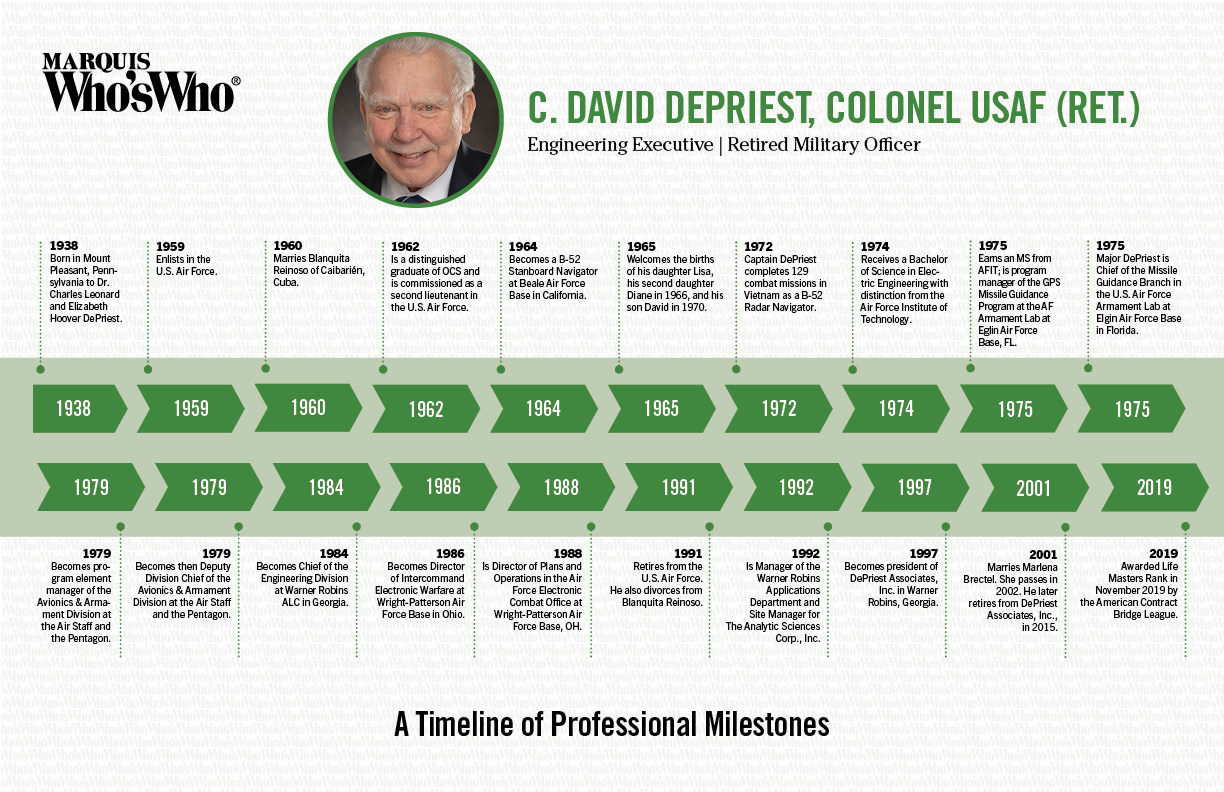 Enlists in the U.S. Air Force.

Is a distinguished graduate of OCS and is commissioned as a second lieutenant in the U.S. Air Force.

Becomes a B-52 Stanboard Navigator at Beale Air Force Base in California.

Welcomes the births of his daughter Lisa, his second daughter Diane in 1966, and his son David in 1970.

Receives a Bachelor of Science in Electric Engineering with distinction from the Air Force Institute of Technology.

Earns an MS from AFIT; is program manager of the GPS Missile Guidance Program at the AF Armament Lab at Eglin Air Force Base, FL.

Is Chief of the Missile Guidance Branch in the U.S. Air Force Armament Lab at Elgin Air Force Base in Florida.

Becomes program element manager of the Avionics & Armament Division at the Air Staff and the Pentagon.

Becomes then Deputy Division Chief of the Avionics & Armament Division at the Air Staff and the Pentagon.

Becomes Chief of the Engineering Division at Warner Robins ALC in Georgia.

Becomes Director of Intercommand Electronic Warfare at Wright-Patterson Air Force Base in Ohio.

Is Director of Plans and Operations in the Air Force Electronic Combat Office at Wright-Patterson Air Force Base, OH.

Retires from the U.S. Air Force. He also divorces from Blanquita Reinoso.

Is Manager of the Warner Robins Applications Department and Site Manager for The Analytic Sciences Corp., Inc.

Marries Marlena Brectel. She passes in 2002. He later retires from DePriest Associates, Inc., in 2015.

Is awarded Life Masters Rank in November 2019 by the American Contract Bridge League.