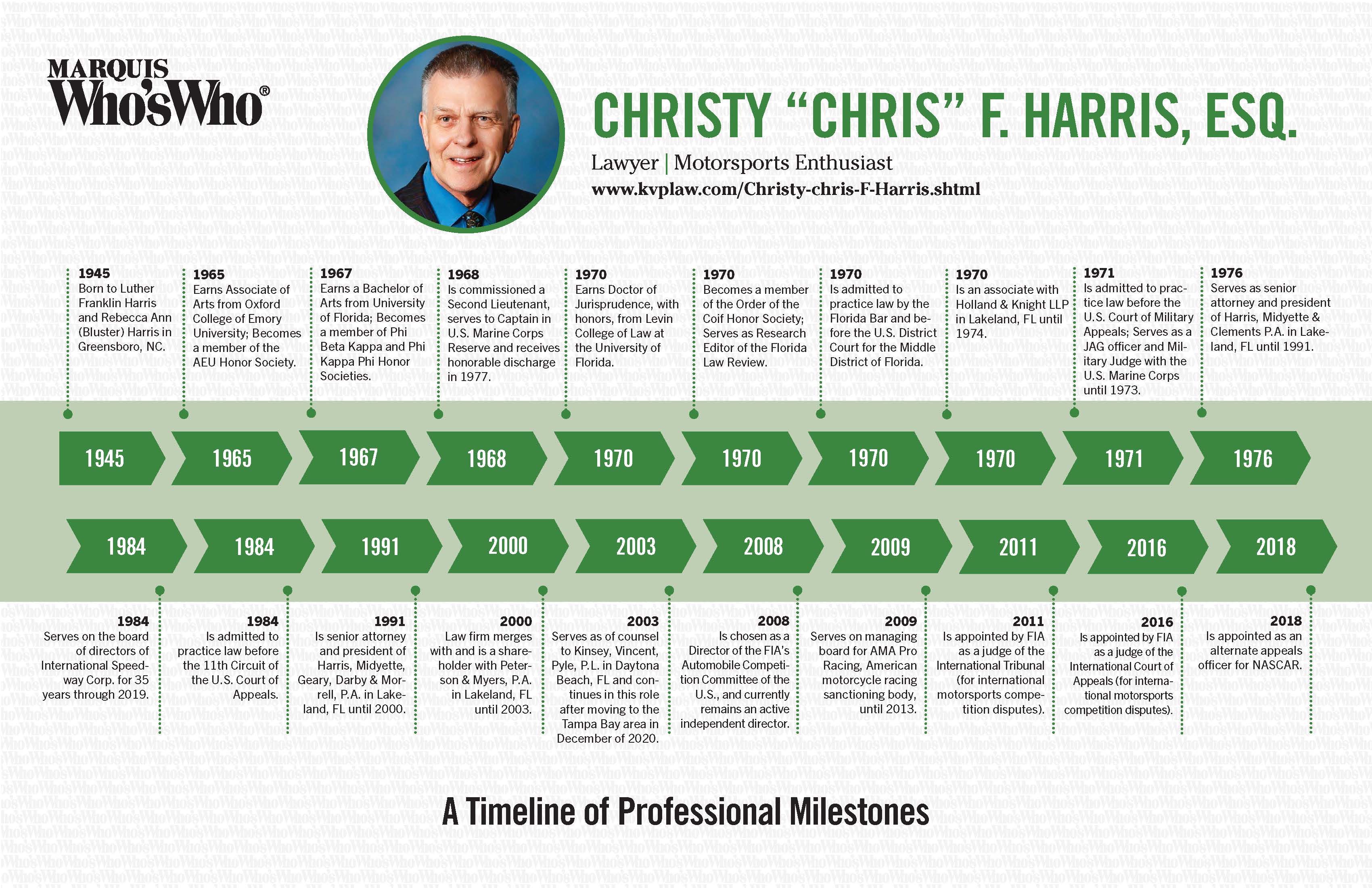 Earns Associate of Arts from Oxford College of Emory University; Becomes a member of the AEU Honor Society.

Earns a Bachelor of Arts from University of Florida; Becomes a member of Phi Beta Kappa and Phi Kappa Phi Honor Societies.

Is commissioned a Second Lieutenant, serves to Captain in U.S. Marine Corps Reserve and receives honorable discharge in 1977.

Earns Doctor of Jurisprudence, with honors, from Levin College of Law at the University of Florida.

Becomes a member of the Order of the Coif Honor Society; Serves as Research Editor of the Florida Law Review.

Is admitted to practice law by the Florida Bar and before the U.S. District Court for the Middle District of Florida.

Is an associate with Holland & Knight LLP in Lakeland, FL until 1974.

Is admitted to practice law before the U.S. Court of Military Appeals; Serves as a JAG officer and Military Judge with the U.S. Marine Corps until 1973.

Serves as senior attorney and president of Harris, Midyette & Clements P.A. in Lakeland, FL until 1991.

Serves on the board of directors of International Speedway Corp. for 35 years through 2019.

Is admitted to practice law before the 11th Circuit of the U.S. Court of Appeals.

Is senior attorney and president of Harris, Midyette, Geary, Darby & Morrell, P.A. in Lakeland, FL until 2000.

Law firm merges with and is a shareholder with Peterson & Myers, P.A. in Lakeland, FL until 2003.

Serves as of counsel to Kinsey, Vincent, Pyle, P.L. in Daytona Beach, FL and continues in this role after moving to the Tampa Bay area in December of 2020.

Is chosen as a Director of the FIA’s Automobile Competition Committee of the U.S., and currently remains an active independent director.

Is appointed by FIA as a judge of the International Tribunal (for international motorsports competition disputes).

Is appointed by FIA as a judge of the International Court of Appeals (for international motorsports competition disputes).

Is appointed as an alternate appeals officer for NASCAR.